On this day April 23rd, last year the government announced that they were recognising the Cornish people under the Framework Convention for the Protection of National Minorities. This was widely welcomed including by myself, that the Cornish were now recognised as a nation. However 12 months on, what has really changed?

I became concerned back in February when people contacted me to say that they had registered to vote online and did not have the option to identify themselves as Cornish, as this screenshot of the website shows: 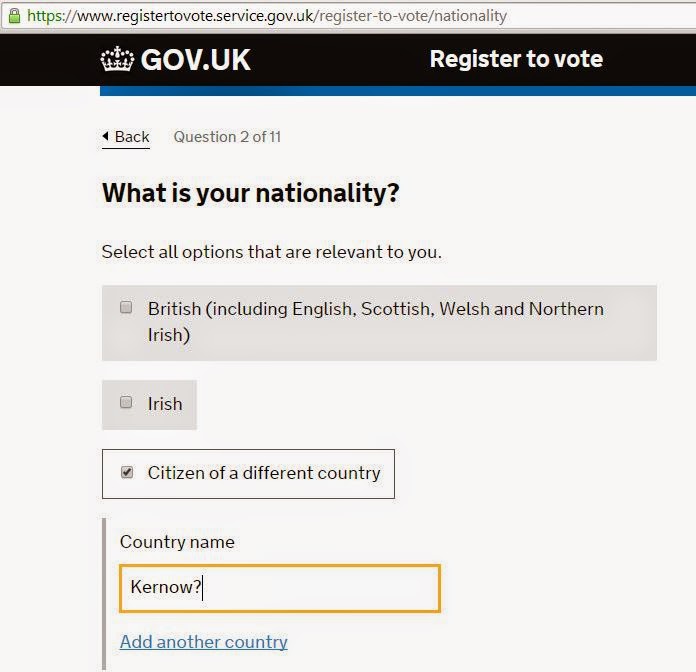 This situation prompted me to contact the Liberal Democrat ministers and ask them what had actually changed since the fanfare of the announcement? Why situations like this were still occurring, let alone things more ambitious than adding a 7 letter word. That was back on the 11th of February and the reply? a deafening silence.

This is the problem with the Conservatives and Liberal Democrats, they'll put out grand press releases about devolving power to Cornwall, Cornwall getting it's own minister and fair funding for our public services, but when it comes to the crunch they just don't deliver. The time has come for Cornwall to stop looking to the same old leopards in the vain hope they'll change their spots and vote for Mebyon Kernow- the Party for Cornwall. We are not interested in propping up minority governments and other political shenanigans but are solely focussed on doing what is best for Cornwall.