Devon and Cornwall Police relocate their helicopter to Cornwall

Only joking it's nowhere near Cornwall, it's moving further away. 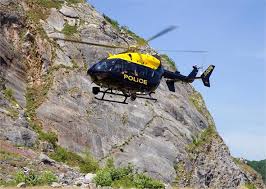 Last week in the news, was the story that the police force have relocated the force helicopter from thehere on the BBC Devon site. I must confess at the outset that I had no idea that D&C police even had a helicopter, until the Keep Cornwall Whole rally in Saltash last October (where it was buzzing overhead). The simple reason for this is that is based miles away from Penzance in Exeter. Even with such a new and fast machine the chances of it getting this far west in time to do anything useful are very slim.
Headquarters in Exeter to Exeter airport. The move will bring the police millions of pounds by freeing up the Middlemoor site (for development presumably) this in itself is good news, this is the sort of thing that should happen before sacking people and raiding people's pensions.


So I wondered why is the helicopter based in Exeter and funny enough this is answered on the police website:


Weather conditions are better in the Exeter area; it would be more difficult to fly from a location further west in the Force area.
The Air Operations Unit is next to the motorway, which is convenient considering that crime frequently enters and exits the Force area via the motorway.
There is a mutual aid scheme with Dorset and Avon & Somerset Constabularies; Air Operations in these forces cover one another in case of emergency. If the Force’s Air Operations Unit were based in Cornwall, for example, it would be too far west to assist these two forces.
If the helicopter base were in Plymouth, it would need to stop more frequently to re-fuel each time it flew east for a job and then back west to Plymouth. The helicopter’s endurance is limited to just two hours’ flying.
The helicopter has always been based in Exeter and it would be expensive for the Air Operations Unit to move location. Air Operations staff all live locally so it is a convenient location.
LINK

Notwithstanding a semi-tropical Exeter micro-climate I am unaware of, I doubt the validity of the argument about weather, the Cornish air ambulance is a familiar site throughout Cornwall and here in Penzance we are used to British International's frequent flights to Scilly in all but the most extreme weather. Not to mention the very frequent helicopter flights from Culdrose. All helicopters seldom affected by the weather save for storm conditions.

The mutual aid scheme is interesting, no word whether the people in Dorset and Avon & Somerset pay for the service and I doubt we'd ever see one of their helicopters in Cornwall, due to distance.
As to the comment about Plymouth, I would use the same logic to argue in favour of a Cornish location or even Plymouth as a location. That is, as the base is in Exeter, it needs to return there more frequently when deployed to Cornwall and West Devon.

Here if you are interested in working it out fro yourself, is a link to a useful google maps based tool that works out distance 'as the crow flies', google maps distance calculator, from Penzance to Exeter International Airport is 89 nautical miles. Also if your interested here's the specification of the police's Eurocopter EC-145 an aircraft capable of a maximum speed of 133 knots. Without working out the maths fully and finding out the response time to get in the air, it is obvious that to reach anywhere in West Cornwall from base would take at least an hour, or if you prefer £1675 each way.

There are two points here, there seems little logic from a Cornish perspective to have the helicopter based in Exeter it's too far,  one it reduces operational effectiveness and two it increases costs. This is yet another example of the Devonwall/ centralisation process that takes jobs and services out of Cornwall. There seems to be some blinkered logic that shoving everything into Exeter is necessary and useful, this is not the case for this helicopter or anything else. As an alternative Newquay airport would be a much better solution for both Cornwall and Devon (59 nm to Exeter, 33 to Plymouth, 28 to Penzance) especially if Cornwall Council would rent facilities at cost. Ultimately though Cornwall would be much better served by our own police force, a Devon based force concentrates it's resources nearby, high time we did the same.

see also Andrew Wallis's blog on the way D&C police is funded in favour of Devon: Paying for the police
By Rob Simmons . at September 14, 2011