The UK enters recession but Cornwall's pain is yet to come

On the day that the UK enters into recession and the double dip recession has arrived it is worth noting how the government's latest budget will really harm Cornwall. I already touched upon the fact that the budget holds no good news for Cornwall, unlike other areas we will not see any additional infrastructure here. Instead we have just bad news upon bad news.

On this blog I have wrote a lot about pasty tax, on This is Cornwall this week they have revealed research by Francis Clark Accountants that the tax will cost Cornwall an estimated 30 million pounds and risk 400 jobs. This is a problem not just for bakers but also for our farmers who produce the top quality ingredients in our favourite dish.  Of course the other great loser in this is you and I, the ordinary people of Cornwall and tourists who will pay more for pasties. Good news for the treasury and their coffers, awful news for one and all in Cornwall.

Then there's the caravan tax. The government is also planing on applying vat to the price of static caravans. This means that the price of caravans will rise, adding more money to ordinary people's holidays. So this will make holidaying in Cornwall less competitive with the continent and leave tourists less money to spend when they are down here and of course less money for pasties. It also means Cornish people going on caravan holidays elsewhere will have less to spend.

The pasty tax was not the only knife heading for Cornish voters backs, the government is also going to introduce regional pay (localised pay) which basically means depressing the wages of places like Cornwall for public sector workers. Teachers, nurses, fireman etc will be paid less here in Cornwall than say London despite the fact they will be doing the same job. Much like the pasty and the caravan tax, this is central government taking money out of the Cornish economy and out of the pockets of people here in Cornwall.

The economic outlook is bleak we are now in a double dip recession, but the future for Cornwall is surprisingly worse, by taxing pasties, caravans and taking pay out of our workers pockets, Westminster is in effect taking millions out of the Cornish economy. There's no indication at all that any of this money would find it's way back here, I'd love to be wrong but it's obvious that Cornwall is heading for a deep recession at the hands of the London treasury and to it's benefit. Quite what Cornwall has done to be so shabbily treated by the Conservative and Liberal Democrat government, I don't know.

Stephen Rushworth (Con) posted this clever ditty on twitter. Sure it'll amuse you as you struggle with the piles of rubbish and recycling that the council's inept organisation has left you to deal with. At least someone finds it funny I suppose.  Interestingly it seems to blame the previous cabinet for waste Julian German (Independent ) rather than the current one Steve Double (Conservative). Yet again the blame game and party politics  trumps responsibility and getting stuff done. 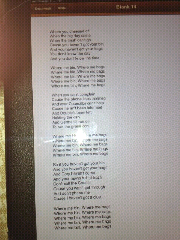 Fat cat CEO salaries and the Conservatives failing to deliver

Here in Cornwall the hot political topic is waste and recycling, with the new contractor now taking over people are confused (maybe just me) about what's going on. We were promised new recycling bags (and the affront of now paying for garden waste) and most haven't turned up there is confusion on the streets as people are reporting waste and recycling having not been collected. There is here a real failure to deliver, but in this we are not alone.

Lots of places up the country are at the moment gearing up for local elections. Thanks to Craig Weatherhill who spotted the Conservative election broadcast which features yet another Conservative failure to deliver. Eric Pickles bemoans the large salaries of CEOs of councils "Manchester Council: 200,010. Newham Council: 188,022. Newcastle Council 173,784." With the usual waste of taxpayers money rhetoric yet why have they done nothing about the Tory led Cornwall Council paying Kevin Lavery who earns more than all these examples? why don't they mention their own council here in Cornwall and their over paying while essential services are being cut left, right and centre?

Email ThisBlogThis!Share to TwitterShare to FacebookShare to Pinterest
Labels: all mouth no action, staggering.

The budget and how Westminster politics fails Cornwall

I have been eagerly awaiting some good news for Cornwall to emerge from Osborne's budget but alas nothing but misery for us. The headlines from the Conservative and Liberal Democrat plan are a tax break for the richest in society, firstly the so called '50p tax rate' has been lowered so those earning over £150,000 will pay less tax and corporation tax has been lowered 2%. In effect this means billions will be lost in revenue to the Treasury from some of the richest in society not just millionaires but huge companies. Certainly the 2% tax cut for corporations is great news for the likes of Tesco and Morrison's, saving them an astronomical amount of money. The rise in the personal allowance must be welcomed and is the only good thing from the budget, but I doubt the extra £630 will negate the regressive VAT rate of 20%. Cutting the VAT rate back to 17.5% or even lower would have been a much fairer tax cut putting money back into the pockets of not only corporations and millionaires and billionaires but ordinary people too. It would also have reduced the (overly taxed) price of fuel which really inhibits growth in Cornwall due to the dispersed nature of our population and due to our distance from the centralised supply chain.

In terms of specifically effecting Cornwall, pasty tax has raised the most attention and blood pressure, (see my blog about that here). This will not only hit the pockets of ordinary workers out for dinner but also scores of small and medium size businesses who will inevitably see a drop in profit with the inevitable price hike. The introduction of linking civil service pay with localised pay conditions, in plain English depressing wages in places like Cornwall, will also take millions out of the Cornish economy. It is measures like this that are paying for taxes to be lowered for the richest people and companies in the UK.

During the budget speech Osborne announced plans to invest in the infrastructure of the rail network in the North of England, I am no expert in this part of the world and I am sure it is great news for them. But I couldn't help but feel that Cornwall had been let down again, previously the government announced plans to invest billions in High Speed 2, cutting rail journeys to and from London. This government is by no means adverse to investing in public transport but seemingly not in Cornwall, where services have being steadily reduced, to stations like Hayle for example. Even the Conservative-Independent Cornwall Council are more than aware that the government (of any colour) cares little for rail here and instead of trying to influence Westminster and Whitehall are instead seeking control of rail (see here).

This example of rail is exactly why the party politics and politicking of Westminster is failing Cornwall. Osborne was clear that in announcing the investment in the North of England he was feeding in to the North/South, Labour/ Conservative dynamic of English politics. That is to say that the Conservatives are seen as a party of the south (more like south east) and Labour the party of the north. This announcement of rail investment in the North of England was a counter point to the much bigger plans for another airport serving the south east. It was also a shot across the bows of Labour accusing the previous administration of neglecting to invest in that area.

This is how English politics plays out, the Conservatives accuse Labour of being inept and vice versa and they try to outdo each other when in government with support and investment in each others heartlands. This is why Cornwall is losing out not only because we are a periphery but because we play little part in the Labour-Tory battle (not now and not under the previous government). This government both yellow and blue wings is more than aware that their policies (pasty tax, regional pay, Devonwall, neglecting to invest in fishing and farming) are unpopular in Cornwall.  But they don't care, if this government is unpopular it's both parties that take a hit in the polls. Despite the best efforts of Mebyon Kernow among others no other party are a real threat to the coalition in terms of past voting patterns. They are complacent because they think that people will not desert them and vote for an alternative. They don't need to wheel out investment plans or shelve plans like Devonwall and the pasty tax because jointly the Conservative and Liberal parties have no fear of being unseated. No doubt come nearer to the next general election they'll both attempt to disown the very policies they voted for and blame the other party. For example this election poster in the recent Truro city by election:

The real need for Cornwall is to break out of the Conservative and Liberal Democrat domination of politics. It's with some inevitability that regular readers will find themselves at the part of my blog where I urge them to join and vote for Mebyon Kernow, but I think I have a point. Being dominated by two parties is not healthy for democracy and besides look where it has got us ....