In July last year the 2nd Cornish national minority report was published. It urged the government to recognise the difference of the Cornish people in law by adding the Cornish into the Framework Convention for the Protection of National Minorities, link here to the pdf. Basically this means that the government officially recognises Cornish difference and admits that we are a different people and deserve as much recognition as any other background within the UK. As of yet and as far as I am aware the government has not added the Cornish. This is despite the fact that the Prime Minister himself admitted: "I think Cornish national identity is very powerful". Note he doesn't question whether the Cornish people do form a national identity but accepts it as a fact. He certainly is not alone in the Conservative party, the leader of Cornwall Council co-signed the report as did the leaders of all the party groups on the council: Liberal Democrat, Mebyon Kernow, Labour and the leader of the Independent group. Despite this no action has been taken by the government.

The status of the Cornish and official recognition is a confused and muddled area. On the one hand the government recognises the Cornish language but unlike any other group in the UK they don't recognise the people from which the language belongs. Name any language and any national group in the UK and both their language and their people are recognised in law, whether French, Polish, Welsh, English or Vietnamese. Similarly with the census, the Cornish people have the option to write in Cornish on the form and this is duly recorded, but unlike any other national group we have this option without recognition either in the Framework Convention or the Race Relations Act. The Cornish are in effect in limbo partly recognised here and there and  equally partly ignored. This situation is untenable due to it's inconsistency.

Further too that recent news stories reveal that Cornish identity is on the rise. According to the school survey 41% of school children in Cornwall are recorded (by themselves or their families) as Cornish as opposed to White British.  This trend has increased over the years, the first PLASC survey in 2006 revealed 24% of respondents as Cornish, 2007: 27%, 2008 30%, 2009 34%, 2010 37%. For whatever reason more and more people in Cornwall are identifying as Cornish as opposed to any other identity.

Today the Guardian has published and updated the results of their online survey: How British do you feel?  less scientific it must be said than the schools survey but nonetheless a strong indicator of Cornish identity. Guardian readers were given the opportunity online to enter their postcode and pick a flag. Across the UK 6,549 recorded themselves as British, 8,948 as not British. Of the non-British respondents 2,386 recorded as English, 1,355 Welsh, 2,874 Scottish and 1,309 as others. Unfortunately the Guardian much like the government has not recognised the Cornish for the purposes of the survey, but much like Cameron they have to admit the identity is real and clearly statistically noticeable. By far the greatest concentration of "others" is in Cornwall, to which the Guardian comments: "Another 1,309 people chose other, particularly in Cornwall" link Now we must bear in mind that the questions and options was one dimensional and others may have included anybody not British,Welsh, English, Scottish, Irish, Northern Irish. Nonetheless the frequency of other flags in Cornwall is far greater than any other area. It is safe to assume that these others are mostly Cornish respondents keen to express their identity as such. My good friend John Ellery Bodrugan tampered with the original Guardian map (see here) changing flags for the others to Cornish. 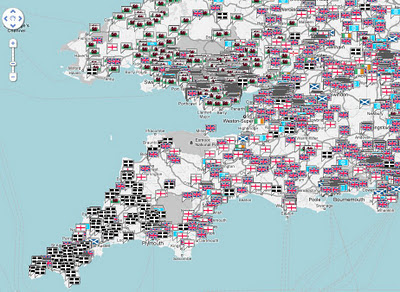 The government position of recognising the Cornish people here and there is slapdash and incoherent. No other group from any corner of the globe faces this muddled approach to recognition why should our corner of this island be singled out like this? There is little point recording Cornish identity on the official census or on the school census or any other census without it meaning anything. The purpose of statistics is to inform policy, without recognition all this hard work and resources spent has no chance of informing anything. The Cornish people have some recognition by the UK government, we do record our identity in diverse ways, there is a clear need for government to catch up with the desires of the Cornish people and concede that we do exist. I don't know why the government don't recognise the Cornish people's identity but fixing this incoherent fudge is really quite simple.
By Rob Simmons . at January 20, 2012