Recently in a car crash of an interview, the prime minister claimed that Cornwall Council needed to make efficiencies and savings, or in plain English cuts to staff and services. Unable to spin his way out of admitting previously announced money was new. He lashed out at Cornwall Council for having reserves, suggesting this money should be spent on front line services. We might assume that reserves are therefore bad, that the government will stop this austerity drive and dip into it's reserves. However data released by the ONS suggests a different story. showing reserves growing. It's high time Cameron got his own house in order and stopped seeing Cornwall and elsewhere as places to offload cuts and then blame unfairly when less money equals less services

The government's gross and net reserves continue on an upward trend.  The ONS released data on reserves today (4/2/15), it reveals that the government holds $39,098 million (£26,034 million). Here's a graph taken from that release, note that despite the recent austerity drive, the amount rises: 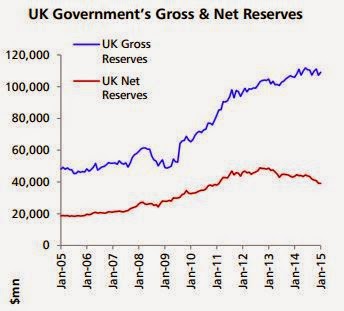 Credit to John Pollard for calling out David Cameron on his attack and explaining what the reserves are for (see that on Andrew Wallis's blog here). We need more people in Cornwall that will call out the spin, bluster and hypocrisy emanating from Westminster.

Perhaps it's time someone pressed the Tories on why reserves are rising when public spending is drastically falling? Why David doesn't take his own advice?