Penzance town council and what it costs you and Golowan

I thought I'd highlight some of the funding of the town council. Party due to the fact that I want to open up local government and try to explain it as I learn of it. Partly, sadly because some people don't seem to like the Golowan festival and the funding it receives from the council. Each to his and her own I suppose. It should be noted a couple of things, firstly the budget was set in April before the elections (quite why they do it this way and not by the new administration/ councillors is puzzling). Town and parish councilors are not paid for their work and their time. Generally there is a commonly held view that the more local the level and the smaller and the more efficient it is. Certainly when you consider what tax you pay, council tax, income tax, national insurance, VAT, fuel duty, alcohol and tobacco duty etc etc it's easier to trace where it's spend on the local authorities, than it is on the apparent money pit of Whitehall.

The split of council tax is 84% to Cornwall Council, 11% to Devon and Cornwall police and 5% to the town or parish council. The bulk of the money goes to Cornwall Council, the police are next up then in our case Penzance town council. So the average council tax is around £1500 pa, £1260 goes to Cornwall £75 of this goes to Penzance and £165 to pay for the police. So where does Penzance's share of this money go? Well here's a picture of the form sent out with every council tax bill at the start of the financial year: 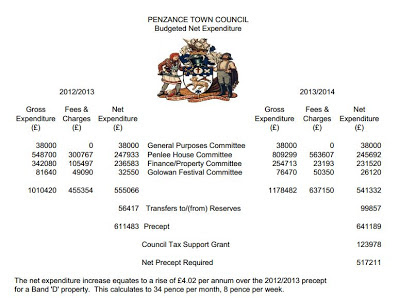 The net cost therefore of Golowan is £26,120 for this financial year down from £32,550 last year. To put that in real terms, about 5% of the precept of Penzance town council is spent on the festival. So of the £1500 pa average that people pay in council tax, as above, £75 goes to Penzance town council and £3.75 of that goes to Golowan, 31p per month about 7 or 8p a week. As this report states the festival brings in £4.5 million to the economy. Some have doubted that figure, but from talking to shopowners and traders and from hearing stories. I know that many businesses have better days and even weeks for Mazey day and Golowan than they do for the rest of the year. Certainly there are businesses that don't capitalise on it. But from a business point of view, if the town council can invest a relatively small amount of money for a large number of visitors benefiting a large amount of businesses, then it's worth it. Unfortunately there will always be winners and losers.

Many have suggested to me on twitter and in the comments on this post here, that Golowan should be 100% self financing. Unfortunately nobody has suggested how this would work. There are staff that work year round organising the week long events over dozens of venues and hundreds of acts and performers. Road closures cost £600 for each one, not to mention of course the numerous risk assessments, public liability insurance, marketing and promotion. Let's not forget most of the work is done by volunteers, who selflessly give their time.

So, what other funding options?

Unfortunately the naysayers don't seem to have a credible, let alone costed plan, for how we might pay for the festival. From my perspective and the previous Town Council who set the budget, the money given to Golowan is a sound investment. It's not a statutory duty of the town council to support community events (although we do support a great number) neither is it a statutory duty to attract people into Penzance to spend money although it is something we do do, supporting events for example, the farmer's market, the christmas market etc.

It has been suggested that businesses pay for the festival, although this isn't a bad idea. When Cornwall Council stopped funding Golowan there wasn't a great deal of take up. I can't imagine that many businesses would be forthcoming. Unfortunately our town centre is struggling there are empty shops and many businesses are hard pressed to keep going. I believe it would be unfair and unrealistic to add to their burden further. Interestingly many of the detractors run businesses and not a single one offered to help fund the festival which is telling of the situation.

We could of course set up toll booths charging people to come into town on Mazey Day, I don't think this would be particularly productive. At the moment scores of volunteers man the road closures for nothing, surely they would want paying if they were responsible for taking money. Overlooking for a moment how logistically you could possibly collect money from the estimated 30,000 that come to Penzance for Mazey day.

To conclude the expenditure is budgeted for, it is not taken from existing services. It costs the taxpayer less money per year than down the back of the average sofa. It brings exceptional value to the community, it draws visitors to the town, it is a boost for the town center. There's a comments section below, if you can find an alternative way of funding Golowan please do. If you can think of a way for the town council to spend this money that will bring thousands of people and millions of pounds into the local economy, I'm all ears. Until then I will be happy next year to propose that the funding is kept in place in the knowledge it is a small investment for a huge event.