Cornish recognition what it means? some thoughts

I'm no legal expert and this early days for Cornish recognition for the Framework Convention for the Protection of National Minorities, so this is more of a discussion piece than a definitive account of what this historic decision means. Take a pinch of salt where necessary add a comment where you wish but these are my thoughts on what it means. There are a number of discussions at the moment taking place and I'm not going to try to summarise them all. But here I'll take a quick look at what the Framework means, what it means for equality legislation and what changes might occour now.

Of course I must echo Mebyon Kernow leader Dick Cole in saying this is fantastic news, but I also agree with Andrew Long when he said:

‘It is excellent news Government are finally recognising something the European Union have recognised for years and the Cornish have known for generations.’
On the Cornish Times website.

What is the Framework Convention?:

Fantastic, historic, momentous, groundbreaking there are certainly a plethora of positive descriptions that could be given. But what is the Framework Convention for the Protection of National Minorities? In short it's an agreement between the states of Europe to protect identities of peoples in the aim of creating and ensuring harmony. As the preamble explains:

"Considering that the upheavals of European history have shown that the protection of national minorities is essential to stability, democratic security and peace in this continent;

Considering that a pluralist and genuinely democratic society should not only respect the ethnic, cultural, linguistic and religious identity of each person belonging to a national minority, but also create appropriate conditions enabling them to express, preserve and develop this identity;

Considering that the creation of a climate of tolerance and dialogue is necessary to enable cultural diversity to be a source and a factor, not of division, but of enrichment for each society;"
link

This is not something emanating from the European Union, it is from the Council of Europe and it is up to members of the council to decide whether to implement it. This map from wikipedia goes some way to illustrating how the Framework stands across Europe: 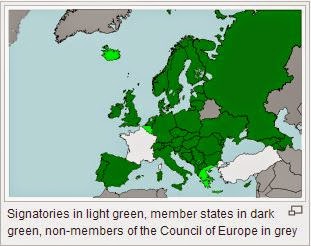 European states that aren't members of the EU (e.g. Switzerland) are signatories, other EU members like France ignore it completely. It is at the behest of state governments to implement this and to define groups individual governments consider a national minority. This is why so much lobbying for Cornish recognition has taken place over the years and finally and thankfully Westminster has relented. In short this is a multilateral treaty that seeks equality and protection of identities of cultures between national majorities (such as the English) and national minorities (such as the Cornish) specifically duties of the state to ensure this.

So what does this specifically mean? In my opinion parts of the Convention are quite woolly and open to interpretation. Such as the first paragraph of Article 9:

"The Parties undertake to recognise that the right to freedom of expression of every person belonging to a national minority includes freedom to hold opinions and to receive and impart information and ideas in the minority language, without interference by public authorities and regardless of frontiers. The Parties shall ensure, within the framework of their legal systems, that persons belonging to a national minority are not discriminated against in their access to the media."

What could this mean? and what limits might "within the framework of their legal systems" actually entail? We could read this and argue that the present form of broadcasting is sufficient "access" or we might argue that "access" requires Cornish language tv, radio and print media. It could also be argued that media is the preserve of the private sector and not the state and it is up to private enterprise, not the government to ensure "access". Although considering the UK has a state media in the BBC and statutory requirements with independent broadcasters are in place, it would be within the power of government to allow access to our minority language.

There's an interesting debate about how the Convention affects Cornwall Council/ government housing policy specifically the local plan. Bernard Deacon has made the argument here that a housing policy predicated on an increased migration to Cornwall (from England) infringes the convention and specifically Article 16:

"The Parties shall refrain from measures which alter the proportions of the population in areas inhabited by persons belonging to national minorities."

The local plan explains that migration to Cornwall is a factor in increasing the house building rate to 2020 so does it therefore follow that the state is infringing article 16?

Although the convention was ratified by the UK government in 1998, since then and until the Cornish have been excluded from it. However other groups were included in it. Most notably the Welsh, Scottish, Ulster-Scots, Gypsy and Irish traveller. Because the government took the view that groups native -if you will- to the UK that had been recognised under the Race Relations Act 1976 where covered by the convention. The Labour government's argument for denying the Cornish was that there had not been a case tried at court that had shown the Cornish to be defined as a 'national' or 'racial' group. So rather than challenging the arguments put to them that the Cornish fit the criteria as a nation (flag, common history, self identification, common geographical origin, language, culture etc). They left it up to the courts to decide, the story of John Angarrack's brave effort to do this and the Cornish Fighting Fund is summarised here.

Other than a dig at Labour and their scornful attitude to Cornish identity and recognition, there is a point I am getting to here. If it follows that the same groups recognised as National Minorities are recognised in anti discrimination legislation such as the Race Relations Act, is the converse true do the Cornish now enjoy the protection of this legislation? Could prosecutions be made in cases where Cornish people are discriminated against and vice versa in cases of Cornish people discriminating against the English? Surely now not only the Race Relations Act but also the Equality Act 2010 ensure protections of the Cornish people. If the government denies this then surely they have broken articles of the Framework Convention? This point is significant because it seems the Convention applies to protections to a people, their culture and identity from the policies and acts of the state. Whereas the Equality act and Race Relations act provide protection against discrimination from individuals and organisations.

On the subject of housing, remember the case in Illogan, whereby a locals were refused housing in the village because they were not from London (Scandal of Cornish homes for Londoners). Could the Equality Act be used here?

The Cornish should now get a tickbox in the census:

The last point I want to make here is on the census, hitherto the Cornish have been able to record that identity on the census but with a write in option rather than a tick box. In the 2011 census all national minorities recognised under the Framework Convention had a dedicated tickbox with their identity written beside. Cornish was the only national minority group recorded but not explicitly written on the form. My reading of Article 4 is quite clear:

I don't see how the government (this or the next) can discriminate against the Cornish by not including a tickbox and denying our identity equal footing with English, Irish, Scottish, Welsh etc. Further there are many organisations that collect data on ethnic and national origins, some do already collect Cornish and some don't. It would now seem the all have to collect Cornish and allow it to be displayed to users on an equal footing with other identities.

The real effects of the recognition of Cornish national identity are yet to be known. Most of this will be a legal process. I would very much expect some of the issues and arguments I have touched upon here to be debated and perhaps tested in the legal system. I apologise for the rambling nature of the above blog and how it flits between subjects. But this is an issue with huge ramifications, this is a 'game-changer' and there ought to be a very real debate on how this all applies. I imagine there are a number of organisations governmental, councils, businesses, housing associations that will have to think how their existing equality policies now apply with respect of the Cornish. I'll leave you with one last thought: we may have laughed (or tried to) at the BBC programme W1A and the fictional Spotlight news presenter overlooked for promotion in the BBC because she was Cornish, but that fictional case might soon be impossible in reality or challenged in the courts....

A couple of articles have caught my eye on this subject of Cornish recognition:

Cornish pasties must be added to the citizenship test
Cornwall to join UEFA? (or indeed field a '7 Nations' rugby team? Commonwealth games?)
The treaty itself: Framework Convention for the Protection of National Minorities
By Rob Simmons . at April 28, 2014