Petition: The Duchy and why money from Cornwall's dead should be better managed

Got caught up with the election business too much to blog about being quoted in the Guardian on the 2nd of May. Their journalist Robert Booth ran a story titled Prince Charles uses 'intestate' cash in Cornwall to fund his own charities, highlighting the charitable donations from the Duke of Cornwall's benevolent fund to some of the Duke's own charities. I've since set up a petition here As some background, the constitutional quirks of Cornwall as a Duchy mean that the Duke is the head of state effectively and lots of the rights that belong to the Crown east of the Tamar west are granted to the Prince of Wales. One of these is that if people die intestate, that is without a will then their estate is claimed by the Duchy, in England it's inherited by the Crown and diverted to the Treasury's coffers. 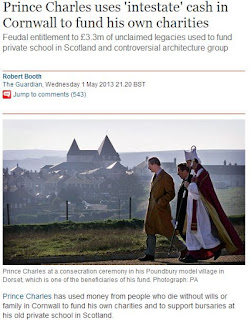 The process is known as Bona Vacantia "ownerless goods", but in Cornwall the money is not taken by the treasury but administered by the Duchy. I blogged a while back on this Bona Vacantia, the Duchy of Cornwall, the case of the missing money and found that lots of the money collected around half was unaccounted for. Further that the main beneficiaries of the fund were charities headed up by Prince Charles. The Guardian story ran with recent news of the fund sitting on large funds of money (£3.3 million) and controversial donations, to quote:

The biggest grant was £19,300 to Charles's charity Business in the Community, whose supporters include some of the biggest companies in Britain. Another £1,000 went to his London-based Prince's Foundation for Building Communities, which champions the prince's controversial ideas about architecture and planning.

In response to this I set up a petition here: Duchy: money collected from Cornwall's dead should stay here. I'm not completely sure I like the title my criticism of the current set up is not only is it another way of taking money out of the Cornish economy but the nature of the donations. There are many worthy causes and charities that need funding, I cited in the Guardian article foodbanks in Cornwall. My primary concern is that there is no accountability for this money and that it is used to fund the Prince's pet projects rather than genuine worthy causes. It seems to me that the money could be better managed with more accountability and openness, hopefully keeping a great deal of the money from whence it came too. This is my aim with the petition and I hope you'll sign it, please.