There's lots of things I'd like to see Cornwall Council doing. My blog on St Piran's day covered some of the areas in which I think the council needs to do more, remind yourself here if you so wish. The general thrust was that the council needs to look beyond itself and to helping Cornwall as a whole. Quite a while ago now, I blogged on the Inspirational Wadebridge Renewable Energy Network which is a great scheme for a community to come together and build renewables on their own terms, where they want them and for their own benefit. I am big fan of renewable energy, I think in Cornwall we need to look to the future and become less reliant on elsewhere for our power. Which also has the great benefit of bringing money into the Cornish economy. I think in the field of renewable energy the council must do more and look to ways in which existing and new businesses can be more energy self sufficient on a smaller scale than large wind farms and solar farms.

Many thanks to Craig Weatherhill for posting this photo to the Mebyon Kernow facebook page, which illustrates a great example of reneweables fitting into existing blots on the landscape if you will. 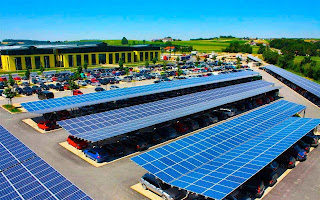 When I was on holiday back along, I saw a smaller scale scheme, like this picture again in Italy, again at a motorway services.  In the high heat of a gorgeous Italian summer is struck me how great it is to harness all that energy from the sun and how nice it would be to get back to your car considerably cooler from being in the shade. I guess at other times out of the rain too, although on that dry and dusty day the idea of it ever raining was a very distant possibility.

I must say credit to Cornwall Council, a few years back before austerity and job cuts were the only headlines coming from Lys Kernow. They did fit solar panels to the roof of the building and it's a great scheme. There's a roof there doing nothing, the solar panels are in no ones way, obscuring no ones view. We need to identify more potential like this, on council buildings, on supermarkets and industrial units.

These are the kind of simple innovative ideas that we must be looking to, another one of my pet rants that my friends and family are probably sick of hearing is water usage. I don't think I've blogged about this before apologies if I'm covering old ground. In Aberystwyth they have a relatively new Welsh Assembly Government building and they've made a great job of it with the water supply. The rain water that is collected on the roof is recovered and used in the building, a simple thing but it reduces the energy needed to treat water and get it to the building and it's just plain common sense. It never ceases to amaze and infuriate me that we live in a world where the water supply has been collected in lakes, reservoirs and rivers. Piped to centers to be filtered and treated with chemicals so it's safe to drink. All at a massive cost and then how much of it gets actually consumed by humans, how much of that treated drinking water is used to water gardens, clean cars, wash hands, bathed in and worst of all flushed down the toilet. We spend an absolute fortune on the treatment of water to make it safe to drink, in a land like Cornwall where rain is abundant we need to think differently.

If I have a vision for the future its one where we capture the solar and wave power, utilise the rainwater that's all around us. But not on a huge scale over a greenfields but on a small scale. Personally I'd love, to live somewhere with my own solar panels and rainwater collection. Nothing would give me greater pleasure than to be free of the likes of EDF, South West Water and the like. In terms of policy, we in Cornwall or should I say the council needs to find ways to encourage businesses and organisations including itself to find ways to become more self sufficient and when they start saving money pass on these savings to the people of Cornwall.
By Rob Simmons . at March 18, 2013