Will the Cornish LEP learn from the mistakes of the RDA? 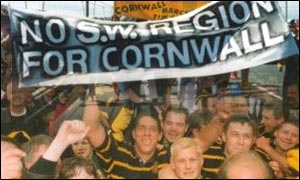 The government plans to scrap the South West Regional Development Agency and create a Cornwall and Isles of Scilly Local Economic Partnership presents a great opportunity to rethink economic policy in Cornwall and the Isles of Scilly and to take charge of our own destinies. The RDA was geographically distant and democratically not accountable to the people of Cornwall, this resulted in the body being out of touch with public opinion. Economic solutions were delivered from above with little or no meaningful public consultation and regard for the communities involved. This approach must be resisted in creeping into the new LEP. Which hopefully will have a more bottom up approach to policy and planning and seek to foster stronger relations with the public and business communities.

There are many criticisms to be made of the RDA, bad investment decisions such as the Border Books distribution center in St Columb, which had attracted a 3.5 million investment to open. The folding of the South West Film Studios at St Agnes, which resulted in the director being imprisoned on fraud charges, for the 1.87 million of RDA funding.  Also the failed Gaia Energy Center at Delabole, a tourist attraction which had attracted 5 million in RDA funding. The Helston Business Park rounds off the failed ventures of Cornish Objective One money, attracting 2.6 million in RDA investment and has laid empty for three years. Whether the fault in these cases lies with the RDA, economic realities or other factors is beside the point. They are symptomatic of the RDA's insistence in bringing new business into Cornwall and the ignorance shown toward existing businesses and industry. Of course new business should always be sought, but there are often reasons why some businesses have grown organically and others have not. It should never have been the job of the RDA to invest Cornish Objective Money in such a reckless way. There were some successes of the RDA such as the Eden Project and the National Maritime Museum which both tapped into the existing industry of tourism. The University Campus at Tremough in Penryn which had tapped into a long term tangible need for degree level education in Cornwall. (We'll skip over the subsidy given to the Department of Transport for the A30 improvements).
It should be the job of the LEP not only to look to the new but also to foster and support the old. It is no good letting the perpetual Cornish industries of farming and fishing and mining fall by the wayside while bureaucrats experiment with introducing new business and industry. My point is that the RDA sought to impose solutions from above, this resulted in patchy performance and did little to support existing industry and business. Politically too the same approach prevailed in the RDA, far off in Bristol, Exeter and Plymouth, unelected bureaucrats (and a handful of token councillors) and the seemingly obligatory consultants envisaged grand schemes of redevelopment with no regard for the local area or existing tried and tested business and industry.
The prime example of this was South Crofty, closed in 1998 due to costs and regulation, rather than mineral exhaustion. Many hoped that the advent of Objective One money could be used to reopen the mine, to utilise the natural resources of Cornwall and the skills and ingenuity of the Cornish people to create decent jobs and bring money into the area. However this was not to be even when a new concern bought the mine the RDA for years and years spent what must have been a great deal of time and money, drafting plans to bulldoze the surface structures and to redevelop the land. Time and again Compulsory Purchase Orders, were threatened a multitude of plans were put forward including shops, houses a new road and even a leisure center all oblivious to attempts to rework the mine or even the danger and cost of building over mine workings and their associated shafts. After the best part of a decade and High Court Challenges by South Crofty's owners, the RDA finally reluctantly gave in and 'allowed' the old tin mine to be. The implications of acting like lord and master were completely out of tune with the idea of public sector bodies serving the people and encouraging business. It does occur that the fortune spent fighting this protracted battle could have been spent better by both the mine owners on reopening and the RDA on other regeneration projects. (For those interested in the long and winding battle between the mine owners and the RDA here's the Falmouth Packet archive.)


﻿
﻿ The real challenge for the new LEP is to learn from these mistakes. To not sit in offices and draw up good schemes on paper without any regard for anything else, but to develop organic schemes that work with not against communities. Perhaps this is a little idealistic and that any plan has the possibility of running into opposition, but it is imperative that this opposition is dealt with properly. The bulldozer approach of the RDA seen at South Crofty was not good in terms of public relations, public service or business relations. The people that work in the RDA never seemed to realise that in life problems are best resolved by negotiation and reasoning not threats and ultimatums. Most importantly of all the RDA never seemed to grasp the idea that in a democracy state workers are public servants, employed to work with the people not against them, to promote consensus not conflict. Further the new LEP needs to look at what Cornwall is strong at and nurture existing industries into bigger ones. Hopefully the new LEP will not gamble with Cornish public money in the way the RDA did and invest in strong cases not outside chances.

I sincerely hope that the approach taken by members of Cornwall Council toward the Route Partnership scheme in Penzance is not indicative of what we can expect from the LEP. For the activities there ranked alongside the RDA in terms of bulldozer diplomacy....
By Rob Simmons . at November 20, 2010