On St Piran's day, MK launched our document Towards a National Assembly for Cornwall availble here as a pdf. In it we outline the powers that Cornwall needs, there are arguments for these responsibilities and an explanation of how things will work. This document was originally launched a year ago. In that time it has been out to consultation with party members and these comments were considered. After that it went out to public consultation and the same process happened. As a result the document is much more robust as it has had a collective input into it.

The broad outline for a Cornish Assembly in the document is that it should be a national legislative assembly, not giving more powers to Cornwall Council. Instead a fundamental rethink of how services are delivered in Cornwall, and many policy areas devolved from Westminster and Whitehall to Cornwall. This isn't about renaming local government it's about bringing real powers to Cornwall and having the crucial decisions made here in Cornwall by people elected and accountable to us not by bureaucrats hundreds of miles away who can act with impunity. 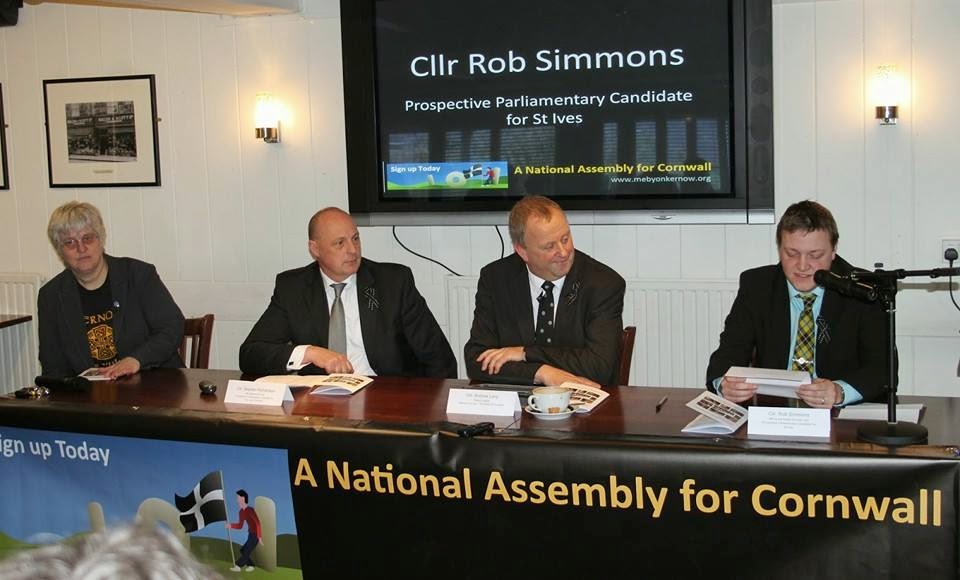 In this way Mebyon Kernow's plans present a whole new slant of devolution. Not simply devolving existing government powers and functions to Cornwall, but also bringing public services and their administration back into public hands. Ending privatisation and abolishing the various quangos and trusts that have an increasing say on public services but are neither elected by nor accountable to the people.

I had intended to review MK's devolution plans alongside the Lib Dems also announced on St Piran's day. However I can not find anything concrete (save for press releases) from them. Slightly disappointing really, as they are an established party of government and as such get millions of pounds of taxpayers money to develop policy, perhaps this lack of commitment and substance is indicative of their approach.

I'm sympathetic to the opinions expressed by the academic Ben Gilby in his article "Cornish Assembly - Can we sit down and talk about this, please?" and of a similar thrust from the Western Morning News London editor Graeme Demianyk in his "Why 'divide and rule' could scupper a Cornish Assembly".  However nearly 5 years in government and Cornwall has watched on as Wales has been given more power, English cities too and Scotland offered a whole host of devolution. I really have to question whether the Liberal Democrats are serious about a Cornish Assembly?

Further when Cornwall Council discussed their version of devolution aka "a Case for Cornwall" the MK group proposed an amendment that this be extended to be more ambitious and the document changed to include the option of a Cornish Assembly. This did not pass, if the Liberal Democrat group had supported this it certainly would have. Further if they had got this into the original case for Cornwall (as they part of the ruling coalition) then it would be a truly a case for Cornwall and not a request for a few more powers for Cornwall Council. The minutes are here.

More missed opportunities for the Lib Dems to push proper devolution to Cornwall onto the agenda. Much like the latter part of the first decade of this century, when the Lib Dems had control of Cornwall County Council and all of Cornwall's MPs, there was little progress on furthering their stated aim of devolution to Cornwall. The real sad thing is that the only conclusion to be drawn is that this is electioneering, sad because many people vote Lib Dem and indeed are members as they think they are the kind of brave radicals that will support positive change like a Cornish assembly. The reality is they are quite scared to be brave and promote radical change and if they'd had the desire this could have been 5 years of successful government for them. I urge people that want more powers for Cornwall to vote Mebyon Kernow a party that is serious about it year round whether there is an election looming or not.