Just now I cam across a staggering statistic from Yes Scotland, they over 100,000 'likes' on their facebook page. Understandably they are quite happy about this, as this photo lifted from the page demonstrates.

Congratulations to them this is a huge feat, as they themselves are keen to note "We have now reached 100,000 likes on Facebook. Thank you very much for engaging in discussion with us - whether you agree with Yes Scotland or not." So likes on facebook and followers on twitter is not a completely accurate barometer of support, you may 'like' but that might be to actually disagree, as they concede. Although I dare say the fact that the rival Better Together campaign's facebook following of 91,000 is a lower is encouraging for the pro independence movement. On twitter the split is 14,544 to Better Together and 24,380 to Yes Scotland. Again the Yes campaign has a greater following and reach, again cause for concern for unionists. It's a well talked about fact that social media is becoming bigger in politics and not just for parties, for campaigns and campaigning too.

There is an interesting power struggle going on at the moment (or should I say to the fore as it is perennial) between the Unions and the Labour party and on the other hand Government's controversial 'gagging bill' which is opposed by all sorts of charities, campaigning groups, trade unions. Politicians jealously guarding their influence and prominence in political discourse against outside rivals. Years and years ago, there was a lot of debate about the role of the state in international politics and whether governments would in a sense be second place actors behind the United Nations, the EU, multinationals, religions and that globalisation rendered states impotent.  There is the same dynamic in domestic politics going on and now and definitely coming to the fore, political parties are losing influence to the vast myriad of campaigning groups. I'd argue much like the role of the state in international politics, parties can govern, legislate and do things groups can not, in much the same way the US can dominate politics in a way companies, the UN or EU never can. But it is nonetheless of concern and questions the democratic legitimacy of the traditional political parties and questions how politicians engage with the public.

Consider for example the fact Yes Scotland has 100,000 facebook likes, many doubt the 'independence' of the campaign that it's a SNP front, which stands in stark contrast to the 28,595 likes of The SNP itself. We might assess the counter claim that Better Together is a Labour front, but it's hard to make a direct facebook comparison, the UK Labour party (there isn't a seperate Scottish Labour page I could find) has 152,956 likes which doesn't compare favourably with Better Together's 91,000. If social media is anything to go by there isn't a direct link between online support and yes voters being SNP and no voters being Labour. (I know a slightly obvious point.) But if we flit back to the point about campaigns outstripping parties, it is a significant gulf.

The blog UK General Election 2015 does lots of interesting analysis of polling and voting intentions, if you like that kind of thing well worth a look. They also do a monthly round up of Political Cyber Warriors, it's worth looking at their screenshots of facebook and twitter followings and making some comparisons: 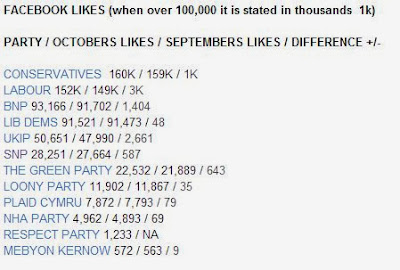 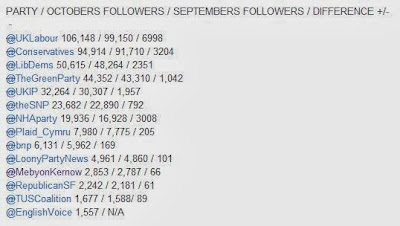 The real question for politicians and political parties is why are people more inclined to join campaigning groups? and engage with them on social media? Why are people more inclined to talk about Amnesty International than the parties that govern us? Why do political parties that dominate political news, operate with multi-million pounds budgets, and have hundreds of paid full time staff, as well as MPs and councilors, fail to attract as much social media support? People are obviously interested in politics, so what are political parties doing wrong? It's something that needs to be looked at, theories or ideas please share them below.

To return to the original point, I don't know what the Yes Scotland campaign is doing right, but to have that many people engaged on social media and to be outstripping parties and indeed other campaigns that are so well established is an impressive feat.