A different model to the present Duke of Cornwall's benevolent fund?


A while back I started a petition, calling for the money from bona vacantia (money from people who die in Cornwall without a will inherited by the Duchy). To be better spent and managed, it came out of a frustration on where the money currently goes, more on that in this previous post explaining curiously missing money and the preference given to Charles Windsor's own charities. The majority of money leaves Cornwall and I think this is a great shame. We have a centralised political state and centralised business in the UK, no end of money is raised, earnt and spent in Cornwall that quickly flows over the Tamar. This constantly undermines the Cornish economy and although the bona vacantia that goes into the Duke of Cornwall's Benevolent Fund is tiny in comparison to taxes and profits it is something, and we need to fight for every penny these days.

Some criticism of my petition was what exactly was I proposing? My answer was understandably vague, it may come as a surprise but I have never handled a multi million pound investment fund! From my perspective I think it needs to change and it needs to keep more if not all of that money here in Cornwall where it is raised. It also concerns me that there us no accountability at the moment, the money is claimed by the Duchy in the manner of a public authority but spent as if a personal play thing. I don't think we should standardise like East of the Tamar and feed the money from bona vacantia into the treasury. For 2 reasons, 1 Cornwall will never see the money and it would be a shame to take money from a laudable cause like donating to charities and good causes and sticking it in the pot. Something akin to a situation I find myself in a lot where I get money for my birthday and it disappears and when I'm asked what it was spent on and what I bought for myself I literally have no idea. This is money that there is a chance to do great things with. There are many great causes and charities in Cornwall and although they do get some money form the benevolent fund this should be increased, the charities in Cornwall should get more money and it should go to more charities.

Anyway so I had an idea of what I'd like to achieve, the aims of changing it (like it would be up to me!). But I didn't have a model of how this would work the full ins and outs of the structure and administration of the fund. Little did I know until someone rang me and told me (thanks to Barrie Osborne) that there is a model. The Duchy of Lancaster benevolent fund there the money is spent well here's their policy read for yourself:

Looking at their accounts (see here) 2011/2012 they have more categories than the Duke's fund here's the top 5 from each category. (see the link for the full lists for each category):

and the list goes on, compare to how Cornwall's money was spent in the last financial year: 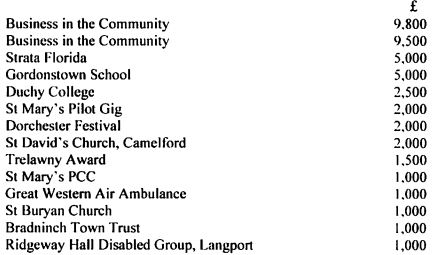 The top result Business in the Community has none other than the Duke of Cornwall as president. Sure enough money does get spent in Cornwall. But year in year out this happens. Below the figures for the last 6 years, every time the top beneficiary of the Duke's Benevolent Fund is one of his own charities.

My frustration is the money from Cornwall's dead is not better managed, we deserve a set up like the Duchy of Lancaster's Benevolent Fund with money spent primarily in a stricter geographical area. Where there's obviously some independence and fairness in the allocation of money rather than a predisposition to fund Prince Charles's charities regardless of the time and attention they spend to Cornwall. I look enviously at the figures, university bursaries imagine that for Falmouth university? Imagine the investment in Cornwall's most vulnerable in the charity and voluntary sector? Surely there's a better way and it's to follow this example.