A while back I wrote about the Tory criticisms of a Cornish Assembly. I pointed out that devolution to a Cornish assembly may well be expensive to public funds but what of localism where does the money come from? My real fear is that powers will be devolved to Cornwall but the taxes that paid for them will remain in London. At the time it was hard to confirm this fear, there is no real plans that cover what localism will mean in Cornwall, what the details and pros and cons will be. In fact I am coming to the conclusion  that localism is an ad hoc arrangement, whereby politicians and bureaucrats decide amongst themselves what Westminster no longer wants responsibility for and they just 'wing it' and fudge something together. However some details have come to light and it seems my fears are being realised. This means for the Cornish taxpayer that we will still pay the same amount of tax (income tax, national insurance, vat, fuel duty, road tax, corporation tax, capital gains etc etc) to central government but that will no longer be spent on the same services and will be siphoned off to be spent elsewhere. Whilst our council tax will pay for services previously paid for by the treasury. The bottom line is the Cornish taxpayer will pay more for the same (if not fewer) services.

Take for example the devolution of council tax benefit responsibility to Cornwall Council. As their press release states:

"As part of the Government’s changes to the national benefits scheme they are passing responsibility for council tax benefit to local councils such as Cornwall Council and we must create our own Localised Council Tax Support (CTS) scheme.
....
Under the new scheme the Government will no longer cover the full cost and is reducing the amount of funding available to Cornwall Council for benefit support by 12.5%. We estimate this means that Cornwall Council has £6 million less funding than the current scheme has to distribute in Cornwall to people who receive council tax benefit."
Changes to the Council Tax Benefit scheme

This means in effect that the council will be faced with the unenviable decision to either cut council tax benefit or find more funds from the already stretched budget. This will be disastrous for people on council tax benefit,  the unemployed, disabled and the lowest earning families will lose out. As we see time and time again taxes for the rich and corporations have been slashed by this Conservative and Liberal Democrats government at the expense of the poorest and most needy in society. The upshot for the Cornish economy is very negative with these changes, effectively whether the council makes the poorest pay more council tax or takes money out of the budget, the Cornish economy will lose an estimated £6 million pounds per year. This money will be kept by the treasury and spent on whichever whim Westminster fancies and further depress the economic outlook of Cornwall. 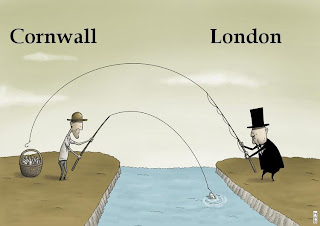 A Cornish Assembly may well incur a cost to public funds, this is true, there is no lie in George Eustice and Sarah Newtons' statement, creating a Cornish Assembly would take public money from London and spend it in Cornwall there would be a cost to the treasury. However what they failed to mention is that localism is very attractive for central government they devolve power and keep most of the tax that was currently used to pay for it. However for the Cornish taxpayer and the Cornwall's economy localism is much more costly it takes more public money out of our economy and keeps it in London. It will result in less services and Cornish people paying yet more council tax. The Conservatives may fear that a Cornish Assembly would take money out of the treasury, their number one priority. But as Mebyon Kernow member I would much rather that more Cornish taxpayers money was spent here and I believe that localism is a complete nonsense and will undermine Cornish public services and our economy without repatriation of our taxes to pay for the devolved functions. I despair that Conservative MPs would rather save the treasury money than protect public services and the Cornish economy, George Eustice and Sarah Newton are the worst examples of MPs representing Westminster's interests to Cornwall rather than representing Cornwall's interests to Westminster.
By Rob Simmons . at September 20, 2012