'sort of' wielding influence at Westminster

In monday's Telegraph there was an article by Conservative blogger Iain Dale revealing who were the 50 most influential Liberal Democrats, highlighting the fact that Charles Kennedy was no longer one of them. Hardly a great surprise to anyone that knows of the schism between the former Liberal Democrat leader and Nick Clegg. Anyway I digress, the Telegraph article was picked up by the BBC Cornwall blogger Graham Smith who noted the absence of Cornwall's Lib Dem MPs from the list, a gracious hat tip to Graham Smith for bringing this to everyone's attention. It truly is surprising that Cornwall's three Liberal Democrat MP's are not included and neither is Lord Teverson. Perhaps even more quizzically is that Julia Goldsworthy is on the list at number 45, quizzically because she is no longer elected, her dedication and talents are amply recognised by the party.

Anyway to me this whole story begs the question; just where does Cornwall fit into Clegg's thinking? Lets face it when Clegg has turned his attention to Cornwall, it is very unclear what he means. In the run up to the election he was interviewed on Radio Cornwall, not long after a prominent former Liberal Democrat had pledged support to Mebyon Kernow's Dick Cole and urged voters to shun the Lib Dem candidate, Stephen Gilbert. In response Nick Clegg said in the interview:

"You know, if people want to make their own individual choices in favour of MK they're free to do so but I think that everybody knows MK hasn't got a hope of getting any MPs here and certainly hasn't got a hope of wielding any influence in Westminster. So talk about wasted votes - that is a wasted vote on a spectacular scale. I think the decision is quite different - do you support a party, the Liberal Democrats, which has Cornwall sort of coursing through its veins or do you vote for a party, the Conservatives, that is basically a party of the home counties? That's the choice."

Again hat tip to Graham Smith whose blog this quote comes from. Two lines stand out to me here, firstly: "MK hasn't got a hope... of wielding any influence at Westminster."  Well this blog argues that neither do the Cornish Lib Dems.

The second intriguing and oft quoted line is: "the Liberal Democrats, which has Cornwall sort of coursing through its veins."  What ever did Nick mean by this? it's tempting to conclude -perhaps churlishly- that the new Devonwall constituency proposed by the Deputy Prime Minister is what he meant. As in the Lib Dems, 'sort of' care about Cornwall and 'sort of' couldn't care less.

Actually though, I think I know what Clegg meant, he didn't mean anything untoward he just didn't know what Lib Dem policy in Cornwall was. Sort of sounds hesitant and that's exactly what it is, basically a more fluent and polished way of saying 'erm I don't have a clue'. 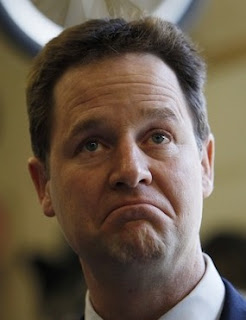 ﻿﻿
Further proof of Nick's ignorance to Cornish politics comes from a Q and A he had in parliament with the Lib Dem MP Dan Rogerson. Hansard column 37:

Dan Rogerson (North Cornwall) (LD): I congratulate my right hon. Friend on his statement. He will be aware that the boundary between Cornwall and England was set more than a thousand years ago, sadly by conquest. Will the direction that he and the Government give to the Electoral Commission through the Bill take account of such ancient boundaries?
The Deputy Prime Minister: I hear what my hon. Friend says about the boundary between Cornwall and England, although I am sure that many of his constituents would be delighted to know that they are also citizens of England and the United Kingdom. The rule of thumb will be that the Boundary Commission should seek to redraw boundaries according to the simple principle that constituencies should be of a more equal size than they are at the moment, within the parameters that I have described. That will be the predominant requirement on the boundary commissions, and it will be of greater weight and importance than any other considerations.

It seems very odd for a leader of a party to so openly disagree with a member in such a way. Rather than agreeing with Dan about the Cornish-English border or quietly overlooking it, Clegg had to openly disagree. This not only shows disrespect to Dan Rogerson it also shows a callous lack of sensitivity to the aspirations of Dan Rogerson and his Cornish colleagues Stephen Gilbert and Andrew George. All have committed themselves to the cause of Cornish devolution in their Programme for Cornwall, which seems to have been completely ignored by Nick Clegg and undermined by the insistence on a Devonwall constituency.

So what exactly is the problem between Cornwall and Clegg? he obviously has little idea about our little land west of the Tamar and perhaps less so about the aspirations of our Liberal Democrat MPs. Is he 'sort of 'ignorant to Cornish politics? Is it because our elected politicians rank below actors, lords and ex MPs in terms of influence? Whatever the true reason Cornish MPs are not influential on Nick Clegg and neither are Cornish politics and sensibilities. None of our MPs are amongst the top fifty most influential people and Cornwall itself lags even further behind.