Penzance Town Council and Jubilee Pool, let's dive in when we see the detail

Sometimes at council things change and sometimes these changes are significant, other times councillors reaffirm and clarify what already takes place. Last night at the full council meeting it was more the latter, in regard of Jubilee Pool. 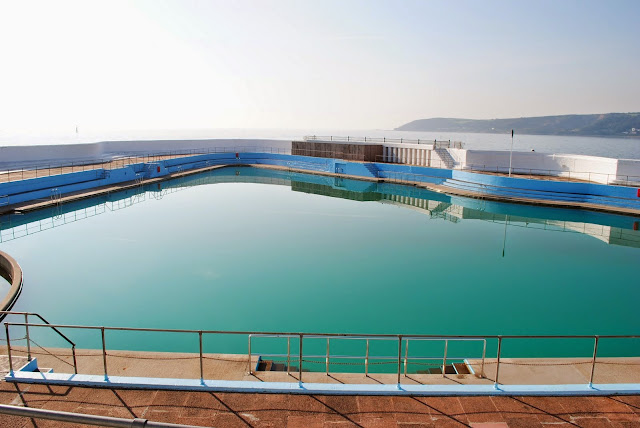 Back in May on the 6th there was a special town council meeting to discuss a proposal put forward by Cornwall Council for the town to support them in their Coastal Communities Fund bid. In the meantime this bid has been successful, which is great news, other than that nothing has actually happened. No funds have been spent on the pool, there are various behind closed door meetings that the Mayor and Cornwall Councillors attend on progress, as all of them are tight lipped about it, I can only surmise there has been no further progress. Yet in spite of there being nothing new we found ourselves as a council discussing the matter last night and asked to commit to taking over the pool. The justification for this was a rumour that Cornwall Council officers had heard rumours that town councillors were having second thoughts, a rumour I wasn't actually aware of.

To backtrack in May the town council unanimously agreed 1. to put funds towards the pool bid and 2. well read for yourself:


Penzance Town Council committed to working with Cornwall Council and The
Friends of Jubilee Pool to form a partnership in respect of taking an active role
in the operation and management of Jubilee Pool. Minutes 6th May

The motion before full council last night was as follows:

That Penzance Town Council agrees to formally become the lease holder and management body for the Jubilee Pool.

I spoke against this as did the majority of other councillors. As I was quoted in the Cornishman  I would not rent a house without reading the tenancy agreement first. This is not because I have changed my mind, I still think the pool is a great asset to the town. as I said at the meeting I think the decision of the 6th was the right decision. But as other councillors explained Jubilee Pool is a multi million pound asset and  multi million pound liability. The former ought to be obvious the latter as it could well be prone to storm damage again, it will cost to keep it running etc. The reality is that the town council has a limited budget and as much as we'd like to have ultimate control over it the risks are very severe. This is why the terms of any lease an/or operating licence need to recognise our position.

I couldn't support the motion put to the town council as it was, we need a lot of reassurances not to mention an actual lease agreement to consider. Frankly agreeing to take over a pool that currently lies derelict is unwise to say the least. I did however support the amended motion. That I scribbled down as:

That Penzance Town Council agrees in principle to formally become the lease holder and management body for the Jubilee Pool. Subject to further discussions with Cornwall Council.


This carried with 9 votes in favour, 4 against and 1 abstention. There was also a guarantee that any lease agreements would be brought to the full council meeting to be approved.

There we have it folks a vote on a lease that has not been offered for a pool that has not been fixed. If you think that's pointless think yourself lucky I haven't blogged about the other riveting developments recently. Standing orders, media policies, terms of reference, mission statements and other great things to send aid those who have trouble sleeping, I'd probably nod off writing them. I can only hope with the various meetings that are going on behind closed doors that something actually of benefit to the town is going on because I have crick in my neck from all this navel gazing.

I must say however there was an item of note to the world outside of procedural anoraks last night. Cllr Axford proposed a motion that the town council write to local GPs asking them to support local hospitals and spell out for patients that the 2 options they are supposed to ask are not simply public/ private, RCHT/ Duchy. That RCHT also covers local hospitals such as West Cornwall and St Michael's in Hayle not just Treliske. That there is a risk without people using them the justification will be there to centralise and privatise these services and close them. Thankfully this passed unanimously.