When will Labour and the Tories let everyone see their back of a fag packet ideas for powers to Cornwall Council? 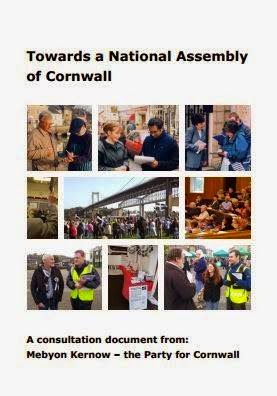 Over the last week, various Cornish politicians have scampered to try to have a position on what Cornwall should get from any new constitutional settlement. They have unbelievably been caught on the hop by the fall out of the Scottish independence vote. Now they are finding themselves trying to both acknowledge Cornwall doesn't do well from direct London rule and at the same time say that bringing significant decision making to Cornwall would be a bad thing. That's quite a tight rope to walk, as such it would be no surprise that their ideas would be a bit of a fudge. But that's the rub, they don't really have any ideas, no proposals and no clue how devolution to Cornwall Council would work. Unless they smoke king size fags I expect the back only has room for "no to a Cornish Assembly, keep power in Westminster." But I'm willing to be wrong and I'd love to see what Labour, the Tories and the Independent group on Cornwall Council, would like to see the future to be. (I've left out the Lib Dems as some of them are in favour of an assembly and some in favour of more powers to Cornwall Council).

Thankfully this is unlike Mebyon Kernow as we were well aware that such a situation would arise from either result after the vote in Scotland. Our document Towards a National Assembly of Cornwall is due to be republished in the coming weeks, after going through a consultation of party members and the general public. We have clear ideas of what powers Cornwall should have, what responsibilities should no longer be in distant politicians hands. We've talked to people about these during various events across Cornwall and online. These are clear, well thought out ideas.

My challenge to the Labour and Conservative parties is for them to come clean, either separately or together spell out what powers they want for Cornwall. How they think it would work? How it would make things better?

Or even better to admit that they issued these hollow statements in response to Mebyon Kernow's ideas. In an effort to snub out growing support for MK by pretending to offer what we are. To come clean, that they are not really interested in devolution and the reason they have no plans and not even a coherent argument is that they are happy with direct London rule for Cornwall as that suits their parties better.
By Rob Simmons . at September 25, 2014