In the last few days there's been something of a whirlwind campaign against government plans to seize control of Cornwall's European funding. Quite why this has come out now is not abundantly clear. But it did. After a flurry of Conservative and Liberal Democrat press releases condemning (rightly) this centralisation there's now been a u turn. But the real scandal no one wants to talk about is why the delay in the next round of 'cohesion' funding.

Well not quite a u turn, depending on your view of a u turn. If I drive in my car to London get to Stonehenge and turn around that's a u turn. If I plan to drive to London and get talked out of it and never drive there is that a u turn? It's much the same with this. Apparently the 'government was considering a proposal', quite who in the government this came from isn't abundantly clear. But I guess someone somewhere thought government should take control of all of the ERDF funding centrally, hardly surprising considering the government's patronising approach to decentralisation. Now it seems the government line has softened. Compare and contrast this with a statement by Vince Cable last June, outlining a done deal on local control on ERDF funding.

But not softened completely the car's still destined to drive some of the way to London. The announcement is that central government will let Cornwall decide to spend it's own money, once Westminster has signed it off as ok. Don't get me wrong this is infinitely preferable to losing the hundreds of jobs widely quoted in administering this money in Cornwall but why should London know best?

The real scandal of course is why the Convergence period ran from 1st of January 2007 to 31st of December 2013. Now rather than being part of the way through the 2014-2020 ERDF funding and actually spending money, government has yet to decide how it is managed and how much they want to centrally control. Which raises the question why 6 months into 2014 am I writing this?  And when will the 2014-2020 funding period actually start?

I can't believe I'm even writing this because it's so obvious and patronising. Cornwall needs investment, latest figures show our economy is faring badly. The problems of seasonal work, low wages, high house prices and high living costs are as evident as they have ever been. What we need is action from the government and Cornish politicians yet all we get is silly public arguments on details. Whilst the bigger picture remains the same and largely ignored. Cornwall can ill afford a gap in this funding whilst the coalition gets it's house in order.

The 'u turn' or change in proposals is a good thing. Local control ought to be the default position of government not central control. So we can decide and the jobs the come with deciding and administering this money should be here in Cornwall, not taken away. The government needs to find fresh impetus to getting new European funding online and stop squabbling about the details and then perhaps the 2014 funding period might start in this year! 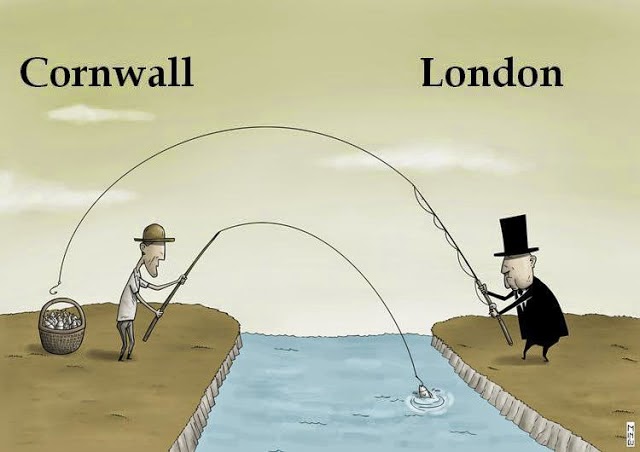