A dedication to the mayor of Penzance Phil Rendle

Well unless you're reading this today or tomorrow, it will be the former town mayor, as tomorrow monday the 12th of May is when the chains will be passed on in the mayor choosing ceremony. Phil has been fortunate to have served 2 years as the mayor, as the election at the tail end of his first year could have meant he was not re-elected or the composition of the council vastly changed and a new mayor been sought. It was perhaps the way in which Phil took to his first year and conducted himself that he was not only re-elected onto the council last year but stood unopposed as mayor. 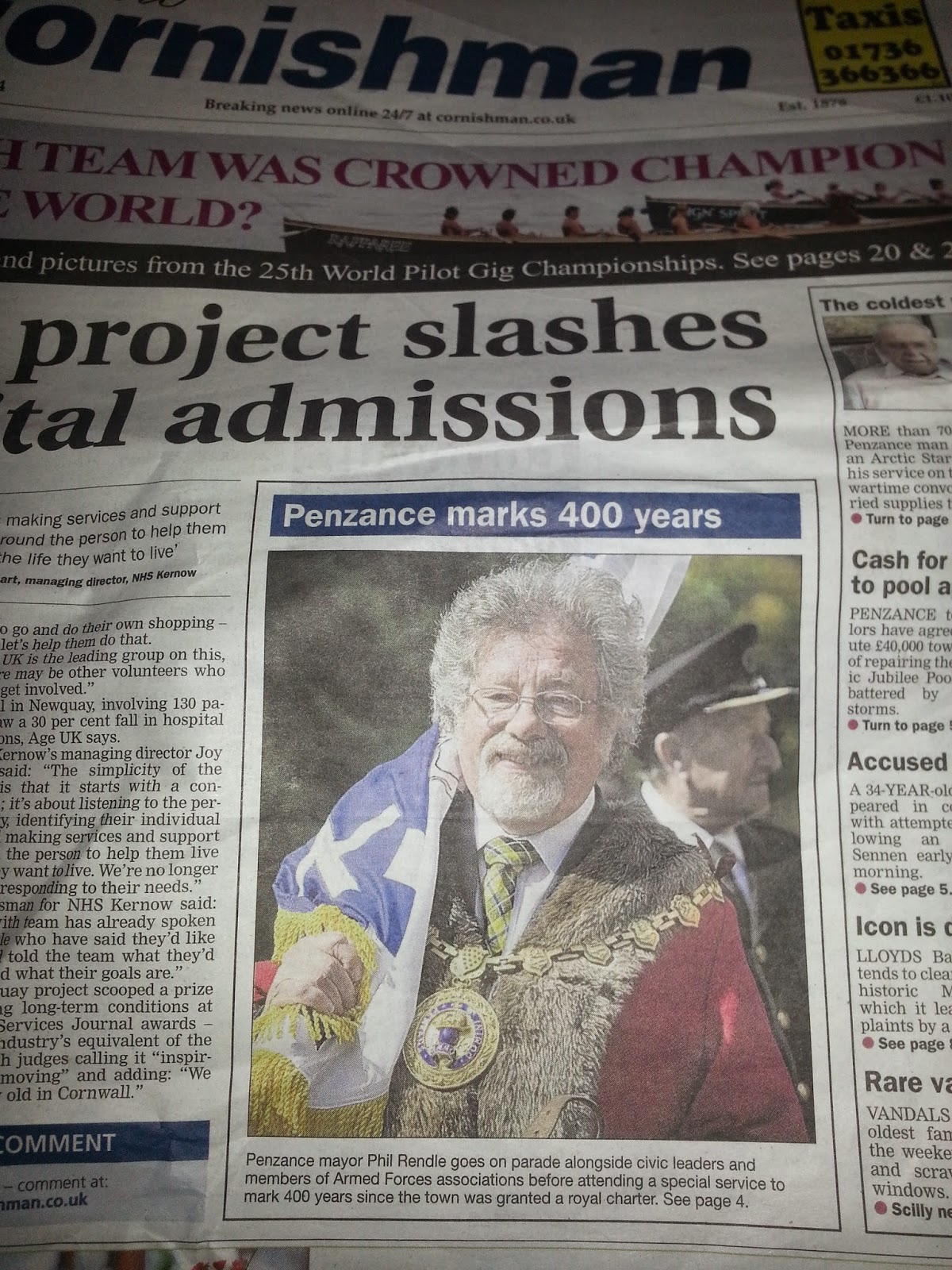 It was fitting that the front page of the Cornishman carried Phil's picture in a story about the Penzance 400 celebrations, pictured right with the town banner. It is indeed a great honour to be the chair of any town or parish council. It carries with it many of the typical roles and responsibilities of leadership, being a spokesperson and the public face and indeed spokesperson of the body. But it does not imply leadership, the mayor must be respected and listened to by councillors, but the role is not to lead but to chair. To remain above everything, guide debate, offer advice, the mayor is not the boss. The power of a council is in the members, the body corporate, the decisions should come from them and the authority of the officers and mayor should reflect this. Needless to say being mayor is a balancing act, Remaining neutral and impartial and trying to oversee 20 councillors, who all individually have their own ideas about the world and more within their various political parties and factions. The various pushes and pulls from members of the public and civic bodies to do this or that not to mention the desires and whims of Cornwall Council to push the town one way or another. Combined with all of the civic functions in the local area and further afield (Trevithick day and Flora Day to name 2) and meetings of various bodies as well as attending all the town council meetings and committees it is a huge task. I would argue that to be done effectively it is very nearly a full time job.

There have been many challenges in this last civic year. Last years election saw 8 new members elected to the town council. All with no experience in local government in Cornwall and a lot to learn about how business is done and indeed a lot of ideas and enthusiasm to bring to the council. The nature of the town council has changed significantly with the redevelopment of St John's Hall and the loss of the Guild Hall for meetings. At a special meeting called (when I was away), it was decided that the town council would not accept the offer of moving premises and renting in St John's Hall. In the last year the town council has become a Living Wage Employer. We decided as a council to create (with the community) a neighbourhood plan to guide development and investment in the town. As mayor Phil travelled to London with senior members of Cornwall Council to talk to the minister about the planned harbour works. After of course the town council had input in the scheme proposed. Finally and after arguments and heartbreak we might finally see some works on the harbour and the Scilly link! This is a quick snapshot and I've left out all the planning for the Christmas Lights Festival (and the new lights themselves), Penzance 400 celebrations, Golowan, the rocky road of taking over cctv from Cornwall Council, the annual budget and many many other things. Needless to say many of these events are huge for the town and will shape both the town and the council well into the future and things will never be the same again as a result of many of them. Interesting times to be town mayor.

Despite all this turmoil and change and the challenges it brings to the town council. Phil Rendle has risen to these challenges admirably with the erstwhile support of the town council staff. He has somehow managed to keep a smile on his face, but I dare say his jokes haven't got much better! But he now will have more time to work on his repertoire. Phil is also well respected in the council and around the town. It is a huge task being town mayor, with a huge set of responsibilities to not end the 2 years as a laughing stock or with many enemies is an honour in itself. Phil can be proud that he hands over the town council in a good place, with a better relationship (I hope) with the people of the town, Cornwall Councillors and Cornwall Council itself than it has done in the past. I wish the next mayor well, it's vital and a challenging role with many various demands to balance, often little thanks when things go well and a lot of criticism when things go badly all to be done with a dignified smile on the face.