Wavehub and looking enviously at the other Celtic Nations.

Last week I blogged and included my letter to the Department of Business, Skills and Innovation about the lamentable lack of progress with Wavehub. Since then I haven't had a reply from the department, last week I was on BBC Spotlight explaining my position and asking why Scotland had wave and tidal projects already operational creating energy jobs and growth yet here two years we have nothing yet to show for this massive investment. I should have mentioned that not only has the Scottish government led the way in delivering renewable marine project but also Northern Ireland has too and so does Brittany. 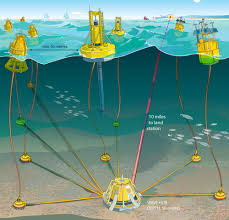 I read just now that Wales even has a major scheme in the pipeline, so the only Celtic Nation to not have devolution and control of our own energy strategy is Cornwall. It's easy to draw the conclusion, give the area concerned devolution and things get done, centralise it to London like they did here and you're left waiting. The Welsh scheme off Anglesey stands to create enough power for 10,000 homes, attracting £70 million worth of investment. Despite George Eustice's claim on Spotlight that he's been working hard lobbying for Wave Hub to not become a white elephant and pushing for regulations and permits to be overcome. The Welsh Government doesn't seem to be having this problem.

The comparisons are stark in Cornwall we had our scheme centralised to London, in Wales they control their own energy, here regulation and permits is a problem in Wales they've just had one granted. Here there seems to be a lack of investment to attract potential users, in Wales Westminster is providing £10 million of the £70 million investment. The starkest comparison of all comes when we think of the inaction over the last two years and the failure to yet see any progress and the words of the Energy and Climate Change Minister Greg Barker on the new Welsh scheme:

"The UK, with its amazing natural resource and outstanding technical know-how is already leading the way on marine power for the rest of the world to follow, and I want to ensure we stay top of this table."

While we continue to have everything in Cornwall micro managed from London, we will be ignored like this. Cornwall far from being top of the table in renewables and many other things looks set for relegation into obscurity.

n.b one of the claims made by the government was the attraction of the Irish firm Ocean Energy to Wavehub, the press was ran the story over 12 months ago that they would be hooking up by the end of 2012....
By Rob Simmons . at February 27, 2013