There is an alternative & Mebyon Kernow is fighting for it 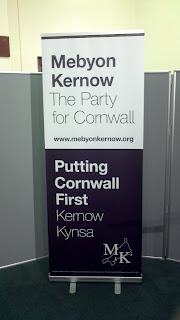 Listening to the speeches of the Plaid Cymru MP Jonathan Edwards and SNP MSP Kenneth Gibson at the MK conference it was clear to me there is a better way of doing politics and only Mebyon Kernow can offer it to the people of Cornwall. Plaid and the SNP have forged a path not just of devolution but also better governance and  fairer deal for the people of Wales and Scotland this is an example that MK must follow. There are three messages I heard from the two speakers and I heard them clearly and we must fight, strive and shout to offer to Cornwall the better way of politics other Celtic nationalist parties offer. In my opinion the three messages were: 1. there is an alternative we can dare to dream, the public sector can do more to help people. 2. devolution works it provides better governance and better decisions for the people. 3. The SNP and Plaid are proud of their achievements and are proud to be members of parties fighting for a better deal for their respective nations. Here's how I think those three things apply to Cornwall and the only party to put Cornwall and Cornish interests first.

It is my committed belief that devolution would be good for Cornwall. As the decades have rolled on we have had more and more centralisation, we have been stripped of decision making to London to Bristol to Exeter and to Plymouth. With this ability to make decisions where they matter lost, jobs have gone with it. Rather than people in Cornwall deciding how many police we need and where, it is done in Exeter. Rather than people in Cornwall deciding when and where to upgrade the A30 it is done in London and my friends it is the same story for health, taxation, heritage, the environment, agriculture and fishing. Here alone there are thousands of jobs and millions of pounds lost to the Cornish economy, our taxes funding jobs elsewhere. Devolution in Wales and Scotland has brought both countries thousands of jobs just due to the devolution of administration, the impact in jobs alone devolution would bring the Cornish economy would be one of the most significant boosts in over a decade. Before we even speculate how Cornish decision making would provide better solutions to our unique problems and nurture our unique Cornish talents and expertise.

There is an argument that 'there is no alternative' Cornwall is too small for devolution, this is frankly a very poor argument, Jersey, Guernsey and the Isle of Man have smaller populations than we do and a great amount of independence. Malta, Luxembourg, Lichtenstein are all smaller than us but yet they cope as full members of the European Union. If these small places can cope with great degrees of independence, I am sure that Cornwall could easily cope with devolution within the UK. If these places can have foreign policies, defence policies and membership of the United Nations I am sure Cornwall could run a health service, roads, policing and have a greater say in running our economy. Time and again the Cornish people have proved their intelligence, ingenuity and adaptability with feats far greater than administration and decision making. There is an argument that big is better but this runs contrary to the lessons of history, the number of states created since World War Two is phenomenal as people have realised that making decisions nearer to home is better, that controlling your own destiny is the only path to a better future. Even the states that have remained large tend to be federal where local decisions are made locally, if it's good enough for Wales and Scotland and most of the world it is good enough for us.

The other 'there is no alternative' argument is that the Cornish economy is too weak that we could not survive as a devolved authority. Frankly this is a strong argument there is sense in it, but and it's a big but having a weak economy is no reason to sit on our laurels and be content with the status quo. I contend that the weakness of the Cornish economy is an argument for devolution, it shows we need to start thinking differently we need to do things differently, London's centralised rule has led us into this mess, an abject refusal to bale out our tin mines, an abject refusal to invest in transport infrastructure, an abject refusal to gain a better deal for Cornish fishermen in Europe, an abject refusal to get a better deal for Cornish farmers in Europe and a complete insistence on centralising Cornish jobs out of Cornwall have been major factors in our now poor economy. Westminster has had it's chance with the Cornish economy and they have failed us at every hurdle, they have ignored us and it is only due to the intervention of the European Union and European money that we are not in a worse off state. Our decision making has been gradually centralised out of Cornwall and with it our ability to have a greater say in our affairs which is why we are a neglected little relatively poor corner of this isle.

The other pro status quo argument is that Cornwall Council makes a hash of running Cornwall at the moment, this is true. Because it is far too big to be a local authority and far too small to be an assembly. This is why localism, (that is the devolution of responsibility to Cornwall Council proposed by the government) will not work without a Cornish assembly. We need two tiers of government in Cornwall, we need a small authorities to run local affairs, everything being run from Truro proves the travesty that is centralisation. If something needs deciding in Penzance (or Helston or Bodmin or Callington or St Dennis or Camelford or Bude) it ought to be decided in that community by people living there not looking through bland pieces of paper deciding from afar. Cornwall Council is not fit for purpose as it is, giving it more powers will make this problem worse, it can not cope with what it has to do at the moment. Devolution to Cornwall of a proper legislative assembly upon the lines of the Scottish parliament would provide a great opportunity to right the wrongs of the Lib Dems centralising experiment known as Cornwall Council. We could redesign the council with the people of Cornwall rather than against them as before. The performance of Cornwall Council is a weak argument for the status quo, it should provide us the impetus to change to provide an alternative to provide better government and a better deal for the people of Cornwall. Cornwall deserves better than the current rule by the Conservative-Independent regime in Truro, we deserve better than this unambitious, over grown parish council.

My third point was that MK needs to be proud of what it believes in it needs to explain it's principles with pride and conviction. The party is at the moment, but we need to continue to offer hope and the promise of a better Cornwall and find new and innovative ways of getting this message across. We need to tell people that there is an alternative, that Cornwall need no longer be the poor man of Britain, we can have decent jobs we can have decent housing but in order for this to happen we need an assembly, to make these changes. We need to tell London that we have alternatives, we have dreams and aspirations, we want a better future for Cornwall and Scilly and their tired old rhetoric of 'there is no alternative' can not hold back Mebyon Kernow and we can not let it hold Cornwall back to the present status quo whereby politics does not work for the everyday man, woman and child on Cornish streets today. Change is needed in Cornwall, a better economy is needed, better housing is needed, better wages are needed, better administration is needed, Mebyon Kernow is committed to continuing to make these arguments and fighting to put Cornwall first.

p.s. If you live in the Wendron division, please vote for an alternative, vote for a better deal for Cornwall and vote for Loveday Jenkin tomorrow (24th November) and get her elected to Cornwall Council.

Email ThisBlogThis!Share to TwitterShare to FacebookShare to Pinterest
Labels: toward a brighter future