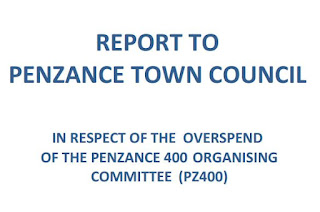 I hope this report will be ultimately a good thing for the council and councillors will consider what is asked of them more readily, I also hope that the Report's recommendation of healing differences between members is listened to. We have this huge devolution agenda coming up and Penzance Town Council seems eager to have more powers, responsibilities and bigger budgets, I feel for this to happen we need to show the people of this town that was can deal with what we do now, in a professional and competent manner.
By Rob Simmons . at August 06, 2015