Solar Farms: why the government should be investing not reducing the feed in tarriff

Recently the coalition government has cut the favourable feed in tariffs for planned solar energy farms, this has had a great effect on Cornwall where many were planned. Cornwall Council (on the 16/5/2011) has written to the government in response to this act. I wholeheartedly agree with the council on this issue, the government should be investing in developing renewable energy and here's some of my reasons why.

Cornwall is land well known for innovation in the sciences and technology, Humphry Davy, Dick Trevithick, John Couch Adams, Henry Trengrouse to name but a few. It is something of great pride to Cornish people that we are vastly overrepresented in terms of our contributions to knowledge in comparison to our size. In this vein, it was with great pride and wonder as a boy to see on the television news of the construction of the UK's first wind farms at Delabole in 1991. It was exciting that something new was being tried, that envelopes were being pushed and new opportunities were emerging. 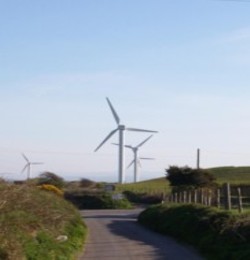 With a similar mind I had looked forward too the construction of solar farms in Cornwall. The United Kingdom has been extremely tardy in developing this technology and lags seriously behind the likes of Spain, China, Germany, France, the Czech Republic and Canada. (Although there has been investment in other renewable sources of energy, here in Kernow for example Wave Hub in Hayle and Geo Thermal in Redruth.)

Here in Cornwall as elsewhere plans to build solar farms had their feet knocked out from them when the Government announced that the feed in tariff rates were being cut as part of the austerity measures. There is some controversy about the old preferential tariffs, which effectively meant that the government were subsiding solar energy plants. It should be noted that the subsidy still applies to small scale solar panelling such as on houses, but has been cut for the larger 'solar farms'. Although we must be very critical of government spending  and subsidies in this time of economic uncertainty and spending cuts. We should not lose sight of the very real need to develop alternative energy sources at a time when electricity production relies upon finite resources of fossil fuels.

There is a pressing need to nurture, develop and support renewable energy for the future. We face a time when oil and gas prices are rising and where Britain in general and Cornwall in particular is reliant upon importing energy from elsewhere. We have natural resources like abundant sunshine, it is there all the time a latent energy and economic resource just waiting to be tapped into. It is foolish that we do not make more of this.

﻿﻿ ﻿﻿
Sure enough solar panels are not wholly profitable which is why they were subsidised. But this need not be the case, with investment of public money then the technology can be developed further. Firstly this will allow more trials of solar panels which will iron out problems and over time will evolve the technology to becoming more efficient and productive. Secondly the production of more and more solar panels will benefit from the economies of scale meaning that construction costs and thus purchase of this technology will be cheaper. In much the same way as coal fired and nuclear power stations required lots of investment initially to make them profitable the same is true of new technologies.

With the proper investment, places like Cornwall could make great profits from renewable energy. Becoming more self sufficient for energy needs and possibly exporting electricity to the national grid. Renewable energy is one of the options available at this critical juncture and although it needs considerable development and investment so too would the other alternative: nuclear energy. Fukushima has brought home to the world that nuclear energy is very volatile and very dangerous. And in definite need of investment itself.

The government despite rhetorically being the greenest ever, truly is not, they seem uncommitted to investing in renewable power. A fact that is no doubt hitting home in the Clay Country where the government and the leader of Cornwall Council Alec Robertson are forcing a waste incinerator on the people there and making a mockery of their own claims to being green. Any hope that waste management would rely upon pushing up recycling in Cornwall, large scale food waste bio digestion or even composting are dashed as it would be much easier for Robertson and Pickles that our waste was simply burned.

There is a lot more detail in the Cornwall Council press release of particular interest is the detailed open statement from Councillor Julian German, which outlines in detail the reasons why the end of the preferential feed in tariff is unwelcome. A very good read.
at May 24, 2011 No comments:

I want to sack my MP, forgotten promises and David Laws

It was announced today that David Laws has been let off  very lightly after acting in a way that could be argued is fraudulent. The rights and wrongs of Law's actions aside it raises an interesting point about MP's and how their conduct is governed. It seems to be up to Westminster how to deal with wayward Members of Parliament the public have no recourse to decide the fate in such cases. In effect politicians police themselves.

After the expenses scandal both Nick Clegg and David Cameron were quick to recognise that the public were justly angry at MP's dipping into taxpayers pockets for all sorts of things from biscuits to duck ponds to rocking chairs. They both came up with the same solution and that was to give the public the right to hold their representatives to account, sack your MP the Conservative manifesto boasts and the Liberal Democrat leader offered You will have the right to sack your MP if they are proved corrupt. Now we hear endlessly from both leaders that they can't enact all their policies because of the coaliton. But in this case they both agree wholeheartedly and they've had a year to enact this policy. Time to roll up those sleeves Dave!