Good bye to the Sea King and commonsense (or is 2 helos in Cornwall enough?) 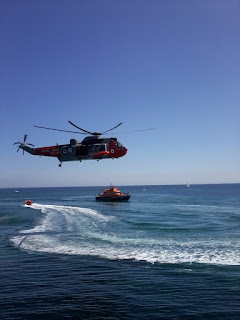 Yesterday it was announced that Bristow has won the contract to provide search and rescue helicopter cover around the UK. In Cornwall this means we will no longer see the ubiquitous red and grey Royal Navy Sea Kings in the west and in the north no more yellow RAF Sea Kings. The RNAS Culdrose and RMB Chivenor bases will no longer host the service and it is being split between St Athan in South Wales and Newquay airport. The fact is the older model Sea Kings have seen a great deal of service in their lifetimes and saved many lives both at sea and on land.


The new provider Bristow is investing in 20 new helicopters, they are faster than the old air frames, can fly greater distances and carry big loads. But they are very thin on the ground. The actual present number is hard to pin down wikipedia has it that 771 Sq have 9 helos at Culdrose and 22 Sq have at least 2 at Chivenor, a trustworthy source is hard to find granted. But it is very alarming that they will be replaced by 2 aircraft at Newquay. I can think of many incidents in my lifetime when more than 2 SAR helicopters have been in the air in Cornwall alone, Boscastle floods being the prime example when 5 helos were on scene. 2 seems by far not enough, much like the government's closing of Coastguard stations it seems a lot to do with saving money at the cost of operational capability and at the risk that all assets need to be continuously operational for the system to work.

As readers of my blog are probably more than well aware, I am no fan of privatisation, I believe it has dubious benefits. There are examples time and again of instances were the bold claims that profits can be made at the same time as providing the same service. Despite the fact the Liberal Democrats and Conservatives criticised Labour's decision back in 2006 to privatise the service they have carried on and I would suggest gambled with the lives of people that rely upon this services (I hope I am wrong). Quite why Labour did not invest in new aircraft is beyond me, I'm sure we all remember they had a great adversity for investing in military helicopters, despite strong calls for them in Afghanistan at the time. I really am at a loss as to why Labour, Liberal Democrats and Conservatives all think privatisation is such a good thing. I really wonder what pressure Cornish MPs were putting on the government over the search and rescue contract. This time 2 years ago (tomorrow) I was blogging about the loss of the Coastguard tug Anglian Princess and expressing frustration that the government had failed to do a risk assessment over the effects of it's loss again I despair what knowledge and concern this government has for maritime and inland rescue.