The case for a Cornish Assembly 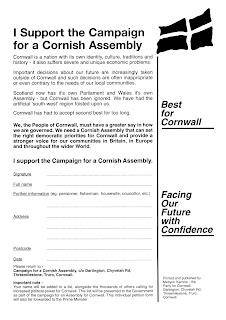 The tenth anniversary of the Cornish Assembly petition has just passed. For a little bit of background the Labour government had announced that any area demonstrating 10% support (of the adult population) for devolution could have it. Always keen to rise to a challenge, Mebyon Kernow duly accepted, I don't imagine for a minute that Blair really thought anywhere would be able to achieve this. But members of MK did getting 50,000 signatures for the petition pictured on the right (taken from Dick Cole's blog) and they were duly delivered to 10 Downing Street on the 12th of December 2001. The government refused to entertain the idea of Cornish devolution and unfortunately the hard work of campaigners came to nothing. Marking the anniversary, three Plaid Cymru MPs, Jonathan Edwards, Elfyn Llwyd and Hywel Williams created Early Day Motion 2532, highlighting the desire for a Cornish Assembly. Any MP that agrees with the EDM can sign it, so far Andrew George, Dan Rogerson and John McDonnell .....


So I just wanted to lay out some of my ideas on why I think a Cornish Assembly would be a good idea. It must be said at the outset that devolution is an ambitious idea it would present the biggest change in Cornish politics for generations. It would be a chance to reform local government in Cornwall and right the wrongs of the centralisation of the unitary authority. It would give the people of Cornwall the chance to have a greater say in our own affairs for us to become masters of our own destiny, to decide for ourselves what changes we want to make and to tailor policy in the best interests of Cornwall rather than what Westminster and Whitehall decides. It's not an idea that suits the unambitious and it's not an idea for people who like the status quo. It does mean change and it does mean the opportunity to build a better more prosperous and self confident nation for ourselves.

A Cornish Assembly would mean that legislation was written in Cornwall, that politicians elected here would decide what happens here. In terms of what would be devolved, I believe like all of Mebyon Kernow that the maximum amount of decisions should be decided here in Cornwall. That we should set our own agendas for transport, health, education, environment, policing and the economy. Say for example if we wanted to upgrade Cornish roads or Cornish trains or buses then we could decide which ones that we would spend our own road tax on. That if the people of Cornwall decide that we should build more hospitals or keep present ones open we should be able to use Cornish taxes to do this. If we decide to make prescriptions free or abolish parking charges at our hospitals we should decide. That if we believe that high tuition fees are unfair, we should decide to make them free or charge less whatever best suits Cornish students, the same goes for EMA. On the environment, if we want to invest in footpaths and woods or create more nature reserves the people accountable to the Cornish electorate should decide. On the economy, if Cornwall's assembly members want to invest our taxes in our fishing fleet or our farms or our factories, if they want to provide incentives to attract companies here, we should decide here in Cornwall. On policing if Cornwall wants to invest in policeman on the beat rather than CCTV it should be our decision, if we want a more decentralised police force to reflect our geography let us decide. At the moment we are at the whim of a government hundreds of miles away catering for a big and diverse state, not all the decisions they make are good for Cornwall. People in Cornwall know better what is good for us than a clerk in Whitehall or a government made up of MPs from the far corners of Britain and a cabinet without members anywhere near Cornwall. Devolution is about choice it's about people making the decisions here, being more accountable to the electorate and living in the community that their decisions affect.

Now all of these decision making powers would need devolution of government departments to make it work. At the moment the amount of central government offices in Cornwall is pitifully low (after decades of centralisation) and those that are remaining are too small to implement a potential Cornish Assembly's policies. This would mean that offices would have to be set up and staff to fill them. This means rather than people in Plymouth, Exeter, Bristol and London, dealing with Cornwall they would be working here. Not only would this mean that they had the interests of Cornwall in their work but also it means jobs in Cornwall. At present there are many well paid civil servants in distant places administering Cornish public services. Devolving these tasks to Cornwall would mean a massive boost for the Cornish economy. It would also mean that Cornwall's youth would not have to leave to find decent fulfilling careers. They could stay here and do the jobs that are now done in distant cities. There's no reason why Cornish taxes should be spent on offices and staff so far away when our economy needs to keep money here rather than exporting it along with our talented and ambitious workforce.

These are some of the reasons I believe that an Assembly would be a good idea for Cornwall. We need to change politics in Cornwall for the better, the status quo is getting us nowhere fast, we need to make more of our own decisions, we need better jobs here in Cornwall and I believe a Cornish Assembly has the potential to do all of these things. Any questions or comments feel free to comment below or email me robscornishblog@gmail.com

The tenth anniversary of the petition has featured heavily in the Cornish press:
from Atlantic FM What happened to Cornish devolution?
from the BBC Mebyon Kernow challenge coalition on a Cornish Assembly
from the Falmouth Packet Demands for Cornish Assembly are renewed
and the Western Morning News MK issues Assembly challenge 10 years on.
So far only two media outlets outside of Cornwall (that I have noticed) have covered the story
Politics Home Plaid Cymru show support for Cornish Assembly
and the Welsh language magazine Golwg 360 Cynulliad Cernywaidd – Plaid Cymru yn cefnogi’r galwadau
By Rob Simmons . at December 15, 2011