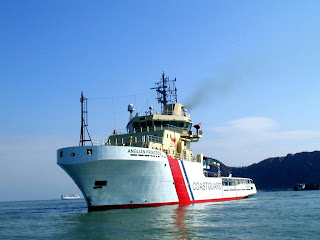 Many of my regular readers (if there are any) will see that I have great concern about cuts to the Coastguard service both here in Cornwall and generally. (my earlier post on the subject) It is also of great concern that the government plans to scrap the Emergency Towing Vessels around the UK coast, the Cornish based vessel being the Anglian Princess, pictured above. Which I blogged about at the end of last year, (the post explains more about the vessel and it's role). The Celitc League has been campaining on this issue and it emerges from a letter sent to them from the MCA that there has as yet no risk assesment of the impact of the loss of these vital tugs. Read the Celtic League's press release here: ETV RISK ASSESSMENT.

It just seems that like the cuts to the Coastguard stations the government has decided to cuts services and then is tailoring assessments and consultations to fit these forgone conclusions. It can't be stressed enough that in emergency services like the Coastguard, the needs and demands of the lifesaving service should be paramount not an afterthought. As the Cornish Lib Dem blogger Alex Folkes, rightly pointed out, cuts to emergency tugs could lead to another Penlee disaster his blog here, those familiar with those tragic events will know that the stricken MV Union Star refused a commerical tug to rescue her for fear of the high cost and thus leading to the infamous tragedy. The government needs to reassess how they approach these cuts and needs to realise that cuts to the Coastguard and the ETV's should be given more significance than numbers in columns.
By Rob Simmons . at March 28, 2011